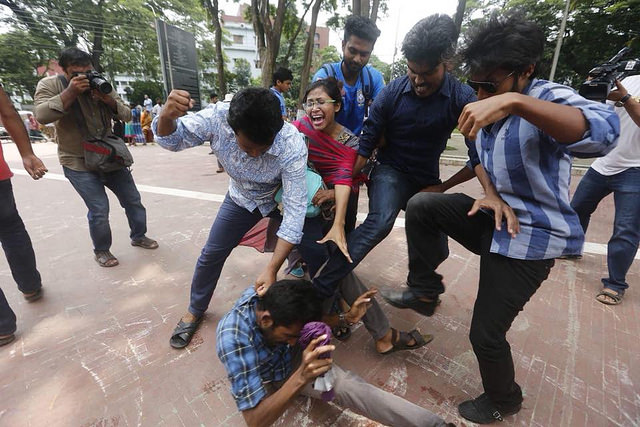 2019 could be an extraordinary time for Bangladesh. More than 18 billion Bangladeshi people are waiting for a remarkable change for the first time in a decade. After a long time, an election is going to held with the participation of all vital political parties.

These parties are separated into two major coalitions. One is representing the current government and their allies, the other is made up of the political parties who have merged as a national coalition front.

From the outside, it seems like a great opportunity. But in reality, these are very worrying times and many wonder if this sign of a democratic process is just an illusion. Is the present prime minister Shaikh Hasina playing games with her nation? Under a guise of democracy, she is exercising autocracy and has changed the definition of democracy. No theory is applicable in Bangladesh at the moment.

The constitution has been cut off by the Awami League government. Political influence and interference in the judiciary amplified after AL assumed power through elections conducted under the military backed caretaker government in 2008. This turned into a serious matter after the controversial elections of January 2014. Gradually the country has been driven towards autocracy. 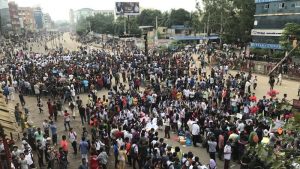 Bangladeshi students block a road during a student protest in Dhaka on August 2, 2018, following the deaths of two college students in a road accident on July 30. Bangladesh shut down high schools across the country on August 2 as tens of thousands of students protested for a fifth straight day after two teenagers were killed by a speeding bus. (AFP Photo)

Sheikh Hasina’s government has not given any leeway to the judicial system. Due to some good judgement and having lost control over him, the government became annoyed with the chief justice Surendra Kumar Sinha in 2017.

To regain control on the judicial system, the government forced him to resign. This is the first time in Bangladesh’s history that a chief justice had resigned. He was forced to leave the country as his life was under threat.

There is no opposition party in the parliament of Bangladesh. The government puts one political party in name only as opposition, but opposition leader General Hussain Mohammed Ershad is an advisor of prime minister and some other minister come from his party. 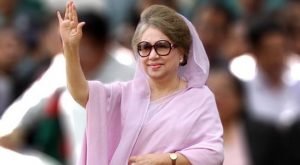 Another big political party with significant support, the Bangladesh Nationalist Party (BNP) is stymied in politics. The BNP chairperson who has been prime minister three times in Bangladesh is in prison in an absurd case.

She is all alone in a deserted jail in false allegation. Many other BNP leaders and supporters are in jail. Thousands of opposition political activists have escaped from Shaikh Hasina’s paw. They saved their lives by becoming refugees in another country.

The government sent BNP activists in prison without any reason. They used law and enforcement force to quash and punished different views – even to suppress the recent student movement demanding safer road, government used their armed youth alongside police and enforcement battalions 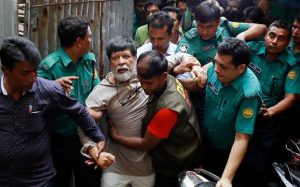 Officers move photographer Shahidul Alam to a Dhaka court where a judge allowed a seven-day remand for police to question him regarding statements about the student protests, Aug. 6, 2018. BenarNews

They threaten them, beaten them, harassed them. Even though common people intently supported this movement, the government arrested many school students, cultural workers, journalists.

World renowned Bangladeshi photojournalist and activist Shahidul Alam was been arrested after criticizing prime minister Sheikh Hasina in an interview about mass student protests in Dhaka.

After more than 100 days of imprisonment and physical and mental torture, he was freed from jail. People lost their freedom of speech. They are not able to express their true opinion. Even some university teachers have faced jail and fines. They have been dismissed from their jobs at universities.

According to a report published on ‘Daily Ittefaq’ 19 November 2018, the government has made 90 thousand cases in 10 years against 2.5 million leaders and activists. Between 2009 and 2018, the number of disappearances amounted to 1,204 people.

Meanwhile, 781 people were arrested and 423 of BNP leader and activists are disappeared. At present, the number of missing BNP activists is 72. In these 10 years, 10,126 BNP activists were injured by law-enforcers.

According to the report of human rights organization ‘Odhikar’ from 2001 to 2018 extra judicial killing in Bangladesh by police and other enforcement force were 3,209. 98 people are forced disappearance by state agencies from 2009 to May, 2018.

Still the people of Bangladesh are not hopeless. They expect a better future. They want freedom to speak, they want freedom to live, and they want to breathe freely. People want to vote for their favourite candidates. They want to drop the autocratic ghost who is clinging on the neck of the people. They are looking forward a democratic impartially elected Government. Let us wait and see.