Researchers building hope for the future

Academics, MPs and those working in the NGO sector gathered at the House of Commons last week to discuss the key findings of an in-depth study that seeks to help overcome the perceived tension between host communities and refugees.

The findings were from  Building Futures: Aspirations of Syrian Youth Refugees and Host Population Responses in the UK, Lebanon and Greece which is the work of  multidisciplinary researchers at the University of Glasgow.

This research team says their work offers the most comprehensive assessment of the skills, training needs, work aspirations, lived experiences, and ethical perspectives of young Syrian forced migrants as they attempt to rebuild their lives in three host countries: Lebanon, Greece and the United Kingdom. It also offers a parallel insight into the attitudes of host populations towards the displaced people.

The research team hopes that some of their findings will help shape government policy in these areas. Amongst MPs attending the launch of the report were: Thangam Debbonaire MP, APPG on Refugees and Kate Green MP, APPG on Migration.

Researchers present their findings to MPs

A key area from the report are the factors preventing young Syrian refugees from securing jobs.

It found that young Syrians are faced with higher levels of unemployment in the UK than home citizens, and that those who are in employment are doing jobs that they are over qualified for.

According to the research, for those in the UK, language is the biggest barrier to finding work.

As a Syrian refugee who lives in the UK, and as someone who has struggled with the language barrier, this is important area for policy-makers to concentrate on.

I found a solution in voluntary work and it helped me to improve my language skills. I feel that a greater focus needs to be placed on organizing voluntary work when displaced people first arrive in the UK. 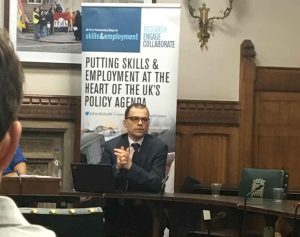 This should be based on the prior work experience of the displaced person, and his or her qualifications. For example, if he or she was a baker back in Syria, volunteering at a bakery would be beneficial and a good use of the person’s prior experience.

Beyond enhancing language skills, I found that there were many other advantages to volunteering. They would also get a good feel for life in the UK, as it is so different from the Middle East.

It helps to integrate into society and learn about customs and traditions; it relieves psychological pressures and helps alleviate suffering; and it helps address the boredom of staying at home.

The study also found that whilst refugees in the UK received better support compared to those surveyed in Greece and Lebanon, access to employment support was patchy.

Other barriers to employment that were identified in the University of Glasgow study include:

In my experience, back in Syria, most of us worked two jobs. We want to work in the UK, but need a bit of help getting there. As an old Chinese saying goes, it is better to teach one the skill of fishing than to offer him fish. The Syrian refugee does not want to be a burden on society, but wants to be effective within it.