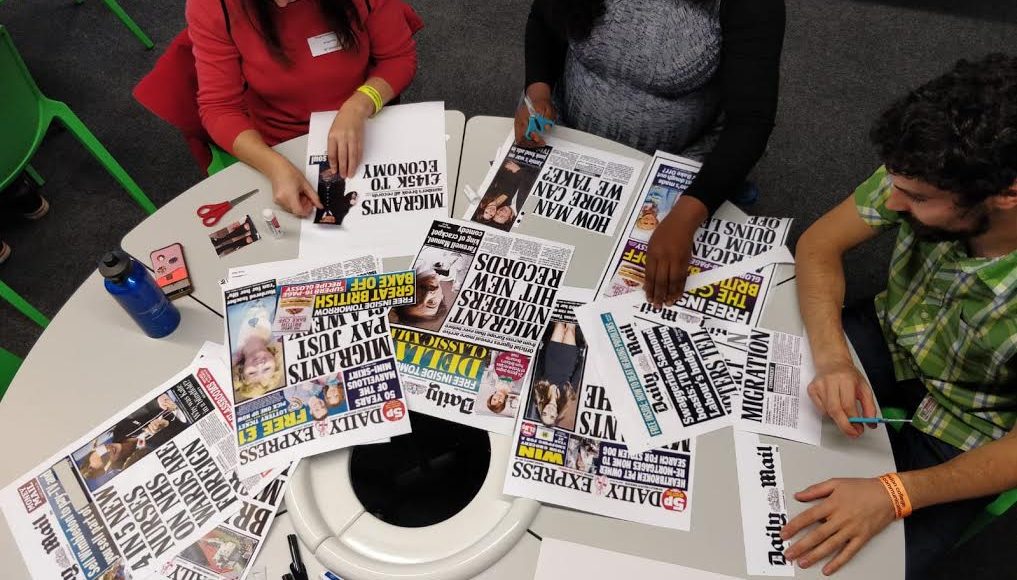 How can creative practices positively contribute to the way refugees tell their stories and how they are perceived by Western audiences? This is what four UAL students who have collaborated with the Refugee Journalism Project have considered when applying their respective artistic disciplines to refugee stories.

Coming from different artistic backgrounds, the students responded to requests for illustrators, sculptors and writers to work alongside refugee journalists on the project, with the aim of enhancing their stories of censorship and exile creatively.

One is Arushi Gupta, a graduate from MA Illustration at Camberwell, who learned about the Windrush scandal while working on the project. Arushi was commissioned to create an animation that would accompany a written piece by RJP participant Michelle Fuller about the hostile immigration environment to which victims of the Windrush case were subjected. 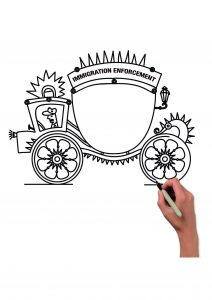 Told as a mythical story, Michelle’s article portrays then Home Secretary Theresa May – whose harsh immigration policies meant many people without legal paperwork were deported or detained – as a witch locking people up in ‘dungeons’ (aka detention centres).

“The metaphor of the witch made it more creative for me to come up with the visuals,” says Arushi. “I grew my own sense of awareness about what happened through illustrating the article, and I aimed to simplify this complex story through the drawings.

“I see myself doing more work like this in the future: going into something that is incorrect in the world and trying to make it correct – or at least putting the idea out there for people to know about it.”

Nick Marcenaro Torres’s self-described ‘gritty’ and ‘semi-realistic’ illustrations seemed the perfect fit as visuals for refugee journalists’ articles, which is how he contributed to the Refugee Journalism Project. His final illustrations appeared on the website of The Guardian.

One of his drawings brings to life a story about obtaining immigration status and the crushing experience of having your identity reduced to one label: refugee. 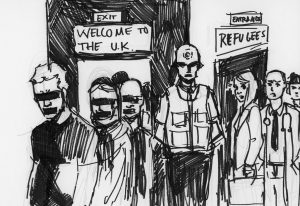 He portrayed this visually as a group of people entering a building where they would claim refugee status. Their individual identities are clear: doctors, lawyers, journalists, enhanced through the use of colour. Emerging from the other side, with a sign above their heads saying ‘welcome to the UK’, the people are grey, their mouths covered and labelled ‘refugee’.

“I wanted to make it clear to the audience that it’s about transforming people into labels and taking away their humanity. I used comic book half-tones and two block-colours to emphasise the division.”

During the project, Nick became aware of his own ‘misconceived perceptions’ of refugees after meeting refugee journalists through the project. “I hadn’t realised I had a stereotyped image of refugees in my mind, but seeing how professional and inspiring these journalists were changed my perception.”

Nick made a connection to his own family, who had to leave Colombia when he was young because of the ongoing conflicts.

“That made me think I am not very different from a refugee: we had to escape a horrible situation, too. I felt connected with the stories of these people; we have both been subjected to discrimination. They are no different than me.” 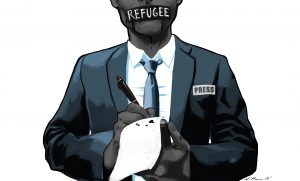 Even feedback on his illustrations have helped Nick to rethink how he portrays people. “I was unconsciously falling back on stereotypes, which is the opposite of what this project aims to do, so I’m glad that it has made me more mindful – I felt humbled to work on this project; it opened my eyes.”

BA Journalism graduate Brittany O’Neill wrote articles and interviews for the project’s blog migrantjournalism.org, including an interview with Ziad Ghandour, who fled his native Syria for the UK, where he began working with the BBC.

“I wanted to support something that I’m interested in and to offer my skills,” Brittany explains. “I have followed the refugee crisis in the news, but working on the project was the first time I had engaged with refugees. I felt grateful to meet professional people from different backgrounds and write about them.”

The project inspired Brittany to volunteer at a refugee camp on a small island on the border of Turkey. “I wanted to do more to help. Working alongside professional journalists who are treated differently made me more frustrated at the state of the refugee crisis in the UK. These exiled journalists all have the same intention, but they’re being silenced in their own countries and not given many opportunities here.

These exiled journalists all have the same intention, but they’re being silenced in their own countries and not given many opportunities here.

“That’s why we it’s crucial to have an organisation like the Refugee Journalism Project, which helps to debunk negative perceptions that exist about refugees by sharing their stories in a positive light, which we don’t often see. The media is usually demonising refugees, but I think they deserve more than that.”

Going into his final year of Fine Art Painting at Wimbledon College of Art, Henry Glover welcomed his biggest challenge yet – literally – by making a life-size sculpture for the exhibition based on a brief from a Turkish journalist on the project. 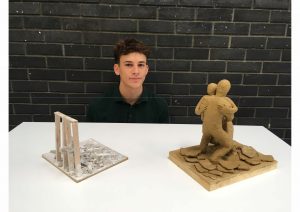 The task was to portray two figures, based on real journalists who have been sentenced to life for writing about the hostile conditions in their countries. In their prison cells, the two figures would be covered head-to-toe in banned newspaper articles that symbolise the danger of their professions.

It’s quite a leap from what Henry normally creates: “I make small, ceramic works, but this project appealed to me. They wanted my expertise on the types of materials that we could use and the practicalities of building something that could be dismantled and transported.”

Henry’s involvement also included his creative input to the art piece. “I suggested an alternative version, which sees the two figures embracing each other in a prison cell, or comforting each other.” Bringing his interpretation to the work, Henry suggested evolving the piece to one that he feels would ‘promote a hopeful image’. 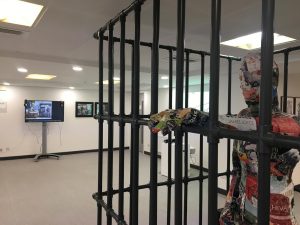 “I felt it would be less hard-hitting or shocking for people visiting the exhibition to portray it this way, without detracting from the important message about how the two journalists are being punished and censored for doing their jobs.”

Pushing himself beyond his comfort zone was sobering, says Henry, as it teaches you to compromise. “You’re doing something for someone else and you want to meet their vision even if you’re more comfortable doing it differently. I’ve never dared to make something life-size until this point, or to take on a proper commission, but it’s a pressure I welcome because I learn through the process.”

The pieces from Arushi Gupta and Henry Glover will feature in Refugee Journalism Project’s Liminality exhibition.