Breaking The Frame is a new report conducted by the Refugee Journalism Project which analyses the representation of migrants, refugees and asylum seekers in UK broadcast news. We started by analysing a year’s worth of TV news bulletins, gaining an insight into the editorial decisions made by news producers.

Investigating the statistical reality of representation in TV news was an important part of the research but it was equally as important to show the human side of migration, too often missing from academic research. Thus, a focus group of thirteen people with lived experience of migration was asked to react to the data in the report. Their responses are insightful and invaluable contributions to a collaborative project.

To put into action the idea of researching with, rather than on, migrants, the participants were then commissioned to create multimedia content in response to the research themes. The stories are rich and varied, including a powerful testimony of one woman’s escape from abuse in Zimbabwe to encounter mental health hardship in the UK, to community efforts by West African and Kurdish refugees during the Covid-19 pandemic. Breaking The Frame is a report that centres refugees voices and opinions. We hope to show that when they are given full control over their own narratives, the varied reality of migration is better represented.

Breaking The Frame finds that the complex and varied phenomenon of migration is not being accurately depicted in TV news. All three broadcasters use almost identical sources, cover the same type of news, use similar frames and visually depict refugees using the same techniques. 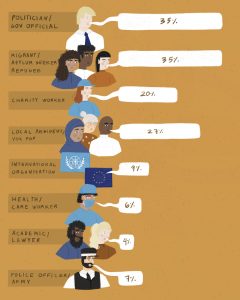 Who gets interviewed in migration stories?

The uniformity of representation is not only reductive, resulting in a limited number of stories being reported about a massive topic, but problematic due to the negative connotations of editorial narratives.

The majority of news broadcasts about refugees still do not consult a refugee voice, but our report found representation to be increasing. We found that alongside politicians and government officials, migrants, refugees and asylum seekers are the most commonly consulted sources. This is encouraging and shows how refugees may have some influence on the stories being told about themselves. However, the data alone could be misleading.

Migrants’ positions within their stories and the ways in which journalists and editors use their quotes is vital. As one of the participants of the focus group, Farisai Dzemba, rightly states:

Addressing the need to qualify an increase in representation, Breaking The Frame analysed the most prevalent frames employed in stories by journalists and editors. The research shows that most stories about migrants, refugees and asylum seekers frame them as victims of some sort.

It is undeniable that many migrants have survived a great deal of hardship in their lives but relying on narratives of victimhood can be patronising and disempowering. The contribution of migrants to their local communities is wrongly overlooked when stories are framed in such a way. As Nudrat Mughal says:

Even the victim frame can be quite dangerous, because when we keep saying that that person or group of people are victims, we are also saying that they have nothing to offer.

When they are not portrayed as victims, refugees are portrayed as threats. Over a third of the stories studied framed refugees as threats. These are often unfounded representations which are used for political purposes, painting refugees as a threat to the nation rather than to the individual. 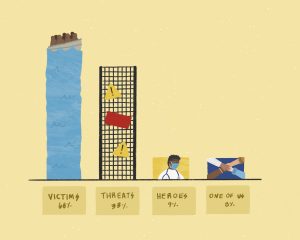 How are migrants represented?

Another barrier to the accurate representation of refugees in UK TV news is the type of news reported by broadcasters. The report found that an overwhelming majority of refugee coverage was dedicated to topics conventionally regarded as ‘hard news’, whereas only 6% was dedicated to ‘soft news’ topics such as gender inequality, culture, race and identity and other social topics. One of our participants, Cryton Chiko identified a major problem with this:

Migrants in the UK are doing phenomenal work, which is considered soft news. However, it is hardly covered.

The evidence gathered by Breaking the Frame suggests that there is a lot of scope for improvement in the way broadcasters cover stories about refugees, migrants and asylum seekers. Vivienne Francis, Refugee Journalism Project Director and Reader and Senior Lecturer in Social Justice Journalism and Knowledge Exchange at London College of Communication, said:

These findings show that much more needs to be done to improve the representation of migrants in the media. There is a wealth of stories, opinions and perspectives that are being left out or misrepresented in news coverage. This has to change.

We believe that by breaking from the limited journalistic frames currently in UK TV news and expanding the range, lens and authorship of the stories currently told, fairer representations of migration can be achieved. 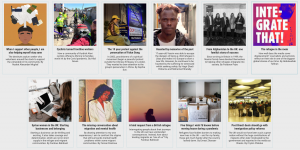 Our participants were commissioned to produce multimedia responses to the research themes, breaking the journalistic frames identified. The result is a collection of stories that showcase the talents of a group of journalists who have a story, but lack a voice.

Read the full report and human responses to it here.